Pearson is the remnant of what used to be a very large British conglomerate. The company started as a construction company in 1844, but by 1920 it had exited the construction business and started to diversify into finance (it owned a stake in Lazard) media and non-media assets (Chateaux Latour, the Madama Tussaud operations). Media assets included a chain of newspapers managed within the Westminster Press Group, the Financial Times and a 50% stake in The Economist, Penguin (a trade book publisher), various TV production businesses (which were later sold to RTL). All these assets have been divested totally or partially over time (like in the case of Penguin), leaving the education publishing assets at the core of what the company does.

Longman was the initial core of Pearson’s education business. Over time, the company acquired, among others, Scott Foreman, the textbook business of Harper Collins, Prentice Hall, Addison Wesley, and the textbook business of Simon & Schuster. The acquisition of NES (National Education Systems) in 2006 effectively set Pearson on the path to transform itself into a digital learning company. Since 2011, as revenue growth started to falter, Pearson has been sizing down its educational portfolio as well.

At its core, the company aims at participating in education sectors that it expects to transition to full digital delivery of content and services, enabling itself to add value to content through data analytics. Thus, the company decided to exit the U.S. K-12 courseware sector, despite holding a leading market share. Management, in the end, decided that financial constraints, the opposition from segments of the educational community, and the highly-decentralized nature of U.S. school districts when it comes to technology decisions means that digital transformation of U.S. schools would either not happen or happen in ways that would make it difficult to build a profitable digital business for Pearson.

North American Higher Ed accounts for 31% of all Pearson’s revenues. 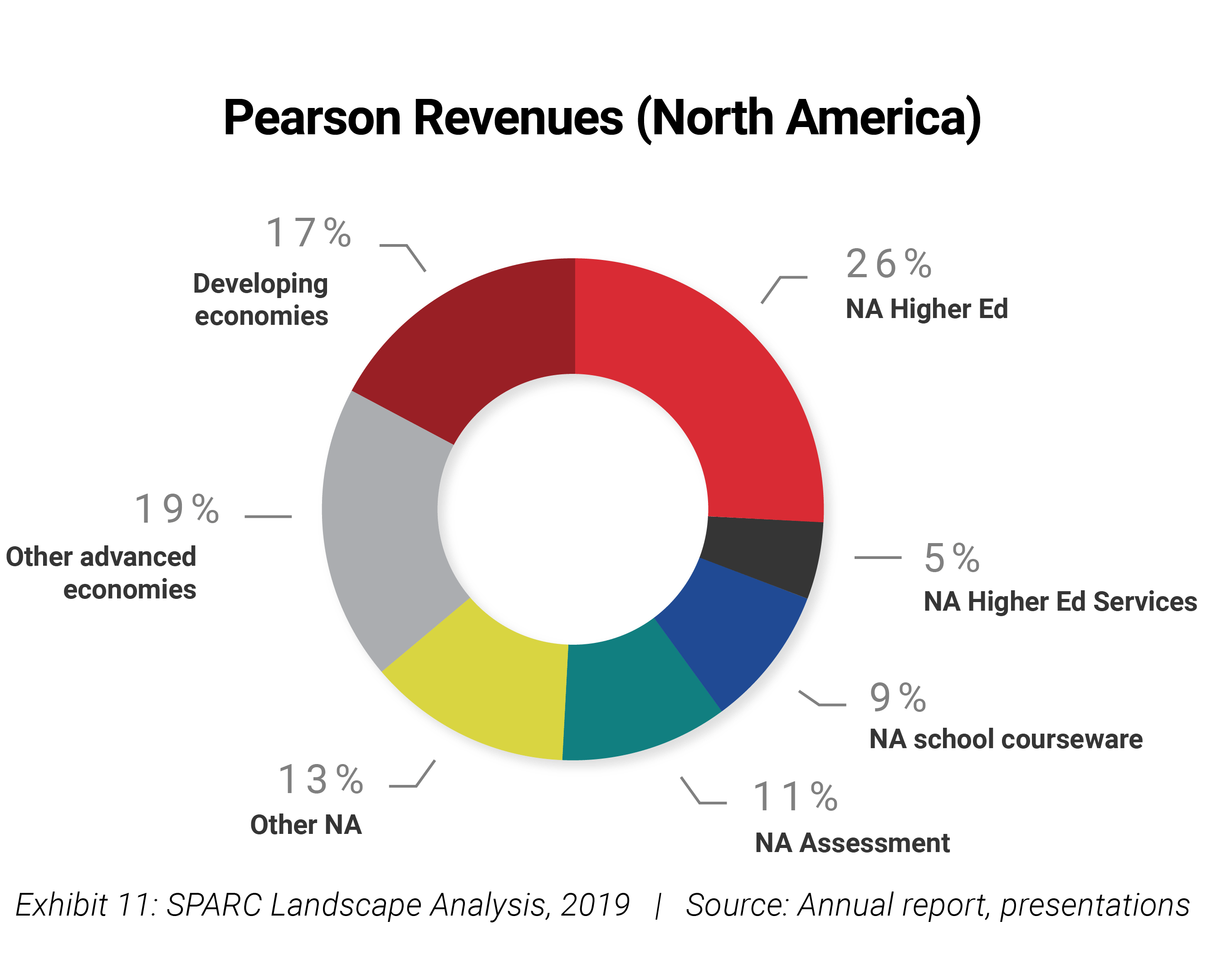 The company does not disclose the profitability of individual business lines. North America recorded an operating profit margin of 13.5% in 2017. Historically, we estimate that higher education operated at an operating profit margin in the low twenties, while school courseware would operate at mid to high teens and assessment at low teens. These margins have declined in recent years as demand contracted across the board.

Pearson has been the only publicly listed leading textbook publisher for several years. For many years, the main competitors (McGraw-Hill Educations and Cengage) struggled to perform adequately. In the aftermath of the financial crisis of 2008, at first Pearson enjoyed a grace period, as U.S. Higher Ed enrollment grew because of the weakening labor market, and K-12 textbooks budgets could still benefit from the lag between the downturn in the economy and pre-approved spending decisions. By 2011-12, however, as the labor market started to show signs of improvement, enrollment in U.S. colleges started to peak, and school districts pulled back spending. In 2012, Apollo Group (a private equity firm) acquired McGraw-Hill Education, while in 2014, Cengage reorganized after an organized bankruptcy. New management teams started to improve the competitive performance of both companies at the exact time when the market started to decelerate, aggravating the performance issues of Pearson.

Because of several profit warnings, the share price of Pearson has undergone a substantial decline (and a recovery in recent months). The stock peaked in March 2015 at £14.92; by January 2016, it had declined to £6.90 and, by September 2017, to £5.69. Since then, it has recovered to £9.17 thanks to more stable performance and the decision to dispose of several assets, as well as reduce costs aggressively.

Management has been very vocal, at least with the financial community, about the declining value of print-based textbooks in the long run, to the point that many investors interpreted the message as “the long-term value of the print textbook business is zero”. Whether management meant to convey this message is irrelevant; Pearson has educated the financial community that only digital courseware and data analytic services will have value in the future. Effectively, Pearson is now committed to driving the fastest possible adoption of digital courseware, and exiting business where this transition is unlikely or impossible.

Pearson has explicitly highlighted, in some of its investor presentations, how data analytics can affect outcomes for students. Very clearly, management believes that digital tools are not just aimed at the face value benefits of streamlining learning, increasing faculty productivity, and lowering costs. A combination of student profiling through adaptive learning tools (which identify the best way to teach to different segments of students), and reporting (through the analysis of study and testing performance of students) is expected to transform schools with very large enrollment numbers, where it is less cost effective to monitor individual students. Pearson’s strategy of focusing its textbooks on institutions with large numbers of students and a lower rate of student achievement naturally leads to developing and marketing these tools.